Here we offer the translation of an article by Professor Fèlix Saltor who draws parallels between Lanza del Vast and Raimon Panikkar, a Catalan writer of the 20th century, doctor of philosophy, chemistry and theology, also recognized as a specialist in Buddhism. 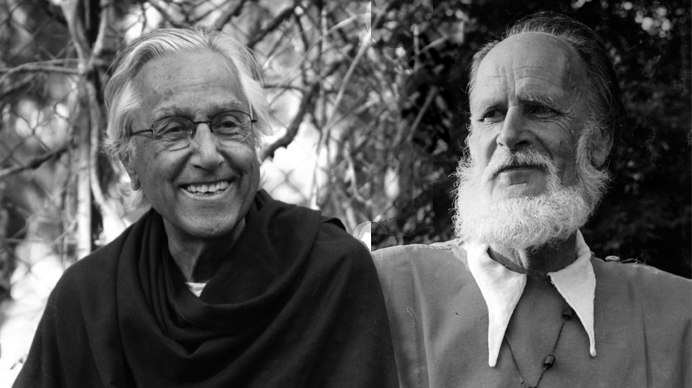 Giuseppe Giovanni Lanza di Trabia was born in 1901 in San Vito dei Normanni (Apulia, Italy), to a Sicilian father and a Belgian mother, both Catholic, and he died in 1981 in Murcia (Spain); he adopted his penname “Lanza del Vasto” (descending from the Marquis del Vasto). Lanza attended high school in Paris and university in Italy; awarded a PhD in Philosophy in Pisa with the thesis: Approci della Trinità spirituale. He travelled throughout Italy and Europe.

Raimundo Pániker Alemany was born in 1918 in Sarriá (Barcelona), to an Indian and Hindu father, to a Catalan and Catholic mother. He died in 2010 in Tavertet near Barcelona; he later changed his last name and was known as Raimon Panikkar. Panikkar studied in Madrid, Germany and Rome; PhD in Philosophy, theology and Chemistry. He joined the Opus Dei and was ordained as a monk (first step). He runed a magazine and did scientific research.

Both of them travelled in India. At the age of 36 Lanza went to meet Gandhi and his ashram in Wardha (first for a year, then he took four trips to India); he made a pilgrimage to the sources of the Ganges. Back in France, he founded the “Arche” communities as “Western Gandhian Order”. While living in a community (in Tournier, then Bollène and la Borie-Noble), he travelled the world preaching the Gandhian non-violence. He is the author of more than 50 books in French and Italian (some of them was translated into seven languages) which are republished.

Panikkar was 36 when he travelled in India (he stayed there 3 years and a half the first time, and returned there frequently). He visited Wardha where Gandhi lived. He made a pilgrimage to the sources of the Ganges during his second stay. Back in Europe, he started a second stage when he left the Opus Dei and devoted himself to research at universities in India and the United States (Harvard, Santa Barbara). In 1987, he settled in Tavertet where he founded the Vivarium Foundation. He wrote more than 50 books in different languages: his Omnia operas in Italian, Catalan, French, English and Spanish are being published.

We still find other coincidences in Lanza’s and Panikkar’s biography: they both speak different languages and show multiple facets; both are Mediterranean, travelers, pioneers of interculturality and interreligious dialogue and regarded as bridges between East and West, as spiritual masters, etc.…

Although the parallelisms in their writings are interesting, those of their biographies even more are so.

a) Both, Lanza and Panikkar, recommend deep silence and meditation in the eastern way of emptying the mind, which are spiritual tools. They invite to be “present in the present”.

b) Both recommend to avoid the fragmentation of life into separate compartments: family life, work, political and social life, spiritual life, leisure and to try to reach the unity of life, one entire life which expresses itself in different areas of activities, a life in fullness. They both worship the Scriptures of all faith tradition and read Eastern as well as Western mystics.

c) They have a complete view on reality, without compartmentalizing disciplines. Particularly, neither Lanza nor Panikkar sees an opposition between philosophy and theology, faith and reason. They gladly talk about one very old wisdom. « Filosofia e Teologia : una distinzione superata », wrote Panikkar.

e) Both of them maintain that “everything is related to everything” and “everything is three-dimensional”. According to Lanza, everything has an inner aspect (1), an outer aspect (2) and the relationship between its interior and exterior (3). If in the outer space everything is external to anything else -and if we want them to be closer, they collide-, in the inner space everything is internal to anything else: and then interrelated.
According to Panikkar, based on its theantropocosmic intuition (or “cosmotheandric”, a more euphonic word), all reality has a divine, spiritual and mysterious dimension (God, Théos in Greek), a human, rational and intelligible dimension (anthropos) and a cosmic, physical and empirical dimension (kosmos). They are not three levels but three interdependent dimensions that can be summarized as follows: “look, think, contemplate”.
And if everything is related to everything, what about the supposed “opposites” like water-fire, soul-body, feminine-masculine, yin-yang, etc.? Lanza uses the coincidentia oppositorum by Ramon Llull, Nicolas de Cues and others, and goes beyond the opposition from the top (completeness or summary). Panikkar dissolves dualisms: “we can distinguish but not separate them”, and facilitates the advaita understanding as “a-duality” (better translation than “non-duality): “neither one nor two”, it’s not a numeric question.

f) In the intercultural aspect, they both say we have to be rooted in our own culture and open to others in order to achieve a mutual cross-fertilization in dialogs which needs to be, according to Panikkar, dialogical but not dialectical.
Regarding Lanza, he is rooted in the Italian and French-speaking culture and by extension in the European culture. Regarding Panikkar, he is rooted in the Catalan culture on his mothers’ side and by extension in those of Western Europe; on his father’s side in the Malayalam culture from Kerala and by extension in those of the entire Indian subcontinent.
In the specific aspect of interreligious, Lanza feels rooted in Christianity while Panikkar, who was originally rooted in Christianity, discovered then Hinduism and Buddhism.
Both opened up to other traditions. Lanza compares religions to flowers in a garden: “If I think that the rose is the most beautiful of all flowers, nevertheless, I neither have to turn my nose up at lilies, nor to crush violets and wildflowers”. Panikkar wrote: “we have to be rooted in our own tradition and open to others”, open to the mystery of life, to a “ecumenism” leaving aside all syncretism.

g) They both defend nature, “the integrity of creation”. Not only on the scientific levels as ecology does, but also with a transcendental spirituality. Panikkar uses the word “ecosophy”. We must try to listen to the wisdom of Earth which is sacred. So, they prefigure the Pope Francis’ integral ecology in the Encyclical ‘Laudato si’.
This vision contrasts with a large-scale industrialization which causes contamination of earth, water and air, the destruction of species, greater divisions in society, etc. that they both denounce. The Western belief in “progress”, idol of modern technics, must be unmasked. This corresponds to the criticism of the “technocritical paradigm” in ‘Laudato si’.

h) Both wrote about peace and worked for peace. The volume in homage to Panikkar which appeared in 1989 (multilingual, 50 authors), has the significant title: Philosophia pacis.

Although their lives, with 18 years apart, unfolded in the last decades, they didn’t converge, except once at the University of Santa Barbara (California), in 1974. Lanza gave his lectures to the general public in premises the Amis de l’Arche found in each town. Panikkar taught in academic world and, at his third life stage, committed to the defense of nature.

In geometry, two straight parallel lines never meet. The same can be said about lives and writings of these two thinkers. Lanza’s books never quote Panikkar and those of the latter never quote Lanza. Likewise, in more than the twenty doctoral theses about Lanza there is no references to Panikkar and in more than the fourteen doctoral theses about Panikkar to Lanza, except marginally.

But because two parallel lines “meet infinitely”, I think their souls finally meet within the infinite Relationship.